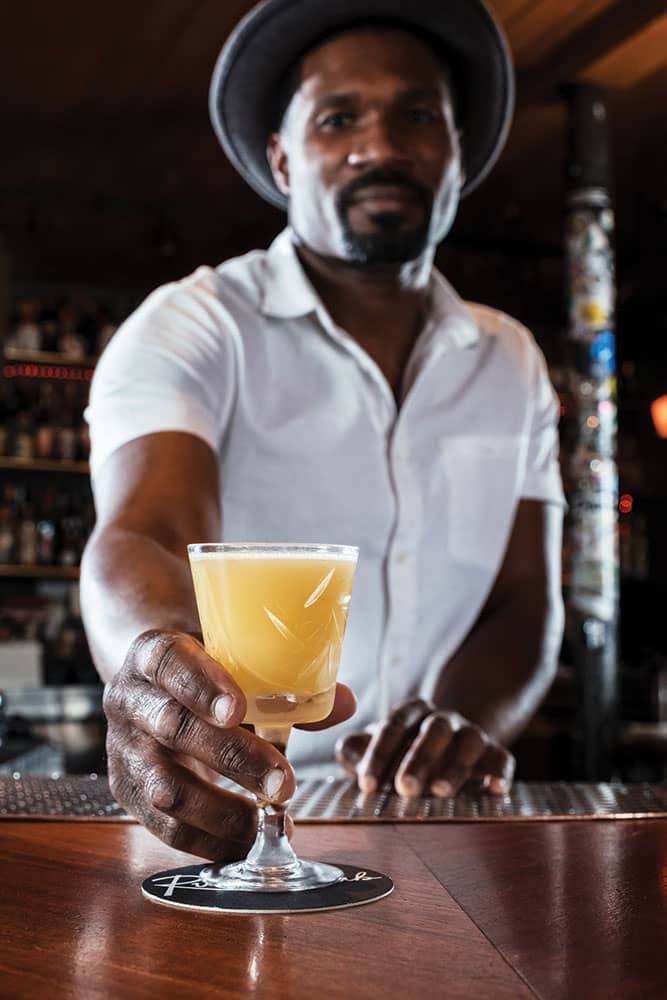 Rum Bars Around the World

Rum is made all over the world, and great places to enjoy it are similarly scattered among the four points of the compass.

When Martin Cate and his wife, Rebecca, opened Smuggler’s Cove in 2009, they featured some 200 rums. Today, they’ve got 850. Serious explorers join the bar’s Rumbustion Society, which offers online and IRL education on a wide range of rum styles— several members have sampled more than 1,000 rums. “When I created the club, my dream was to create educated consumers,” Cate says. He’s done that and then some.

Rumba is found at the intersection of neighborhood joint and rum-nerd destination bar. It’s got an informal and unpretentious vibe, paired with a deep rum list. (It’s well represented with Jamaican rums for those in restless search of funk.) Rum drinks range from the classics—five types of Daiquiri; several variations on punch—to quirky modern variations, such as A Rum With a Vieux. But the cocktails never sail so far into unfamiliar waters that you can’t see the port from which you embarked.

Latitude 29 is a tiki drinks library come to life. It’s overseen with curatorial aplomb by Jeff “Beachbum” Berry, who is rightly credited with single-handedly fueling the tiki revival through his rediscovery of lost recipes for classics such as the Zombie and Nui-Nui. In 2014, he and wife, Annene Kaye, opened Latitude 29 in the French Quarter, allowing guests to advance their tropical drinks education, one sip at a time.

This Portobello Road bar has been serving classic and original tropical drinks since 2003, and under the ownership of Sly Augustin, it’s also helped spread the rum word through Notting Hill and beyond. A décor of midcentury California kitsch creates a relaxed vibe, while a deep dive into the tailored rum selection shows how serious a party bar can be.

Whether you’re looking for a classic Mai Tai, a bespoke cocktail like the Bahama Baba (with three types of rum, cold-brew coffee, orange, pineapple, and coconut), or simply a neat pour of something exquisite from Barbados, Cuba, or Martinique, this rum bar in downtown Athens (also a pioneer in the Greek cocktail revival) has you covered.

Great rum bars are supposed to be fun, a little rollicking, and—duh—packed with bottles of rum. Since 2011, Rum Club has succeeded on all counts, its casual vibe and rum cocktails like the Pedro Martinez and absinthe-accented Rum Club Daiquiri drawing both a committed team of regulars as well as a regular procession of out-of-town rum fans stopping by to check out the bottle list.

Considering the spirit’s Caribbean provenance, rum and rum bars have a natural affinity for the sea—but in the case of Aguardiente, in Italy’s Emilia-Romagna region, that maritime breeze is blowing in off the Adriatic. Over the past four years, owner Jimmy Bertazolli has developed one of the deepest rum selections in Europe, with more than 1,000 bottles of sugarcane spirits, served alongside bespoke cocktails and Caribbean standards like Wray & Ting.

With more than 250 rums in its selection and a deep menu of tropical drinks, The Lobo (which recently changed its name from The Lobo Plantation) is rum’s chief ambassador to the antipodes. In this subterranean space in Sydney’s Central Business District, spirits from the Caribbean and Central and South America populate the shelves along with rums from Australian distillers, and the bar’s vintage rum collection stretches back to the 1930s.

Situated in the Cuban capital since 1817, Floridita isn’t so much a great rum bar (its selection is admittedly modest) as it is a great rum cocktail bar. A number of classic rum cocktails trace their origins and fame to this corner spot in Habana Vieja, and its red-jacketed cantineros continue to mix Daiquiris (and their variations) by the hundreds each day, before the gaze of the bronze statue of Ernest Hemingway (a longtime regular) that occupies a spot at the end of the bar.

Billing itself as a “rumah rum” (home for rum) in the Bukit Damansara neighborhood, Jungle Bird brings the spirit of the tropics to … well, the tropics. Rainforest prints and rattan furniture form a lush environment for sipping cocktails, such as the Koeniggi-Roni (rhum agricole, Campari, dry vermouth, and curry leaf) or the Thunder Thunder (Haitian clairin, Venezuelan rum, Hakka lei cha [ground tea mixture], sesame orgeat, and Thai basil).

The post Rum Bars Around the World appeared first on Imbibe Magazine.