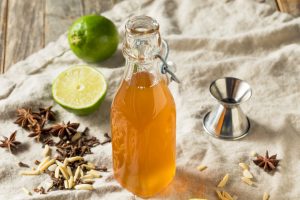 Everything You Need to Know About Cocktail Syrups

If you’ve ever attempted to make a cocktail from home you’ve most likely come across the word syrup. If you pay attention to the multiple squeeze bottle with all the funny little labels in front of your bartender, you’ll notice that the majority of them are a different type of syrup. But being labeled syrup doesn’t necessarily mean that these bottles are loaded with sugar.

The process of turning something into a syrup involves mixing your core ingredients with boiling water until it dissolves into a flavored liquid. Because you are basically melting the core ingredient into a liquid, your goal is to have a balanced richness and viscosity that will complement the other flavors added to your cocktail. The result should be a perfectly executed delicious and well balanced alcoholic drink.

For this list, we’ve composed some of the most popular syrups used in your favorite cocktails, with their ingredients and directions for how to make each one. We’ve also added some popular cocktails that use them with helpful tips for syrup preservation. Enjoy!

Agave is a plant native to hot and arid regions of the world, specifically North and South America, and can be cultivated and distilled into spirits like tequila and mezcal. Agave syrup is also known as maguey syrup, and can be commonly used in place as a vegan-friendly alternative for sweet syrups like honey and honey syrup.

Dissolve equal parts by volume of agave nectar and water

Notable Cocktails that use Agave Syrup

Unlike white sugar, brown sugar has a deep, caramel or toffee flavor due to the added molasses. White sugar is typically considered much sweeter than brown sugar.

Demerara is also referred to as dark brown sugar on certain packaging and is a type of sugar that is darker than brown sugar, with larger crystals that provide a crunchier texture. Demerara sugar retains more of its sugar cane molasses flavor than brown sugar.

Mix the sugar and water in a saucepan and heat gently over a low simmer, stirring until the sugar dissolves; never boil the mixture. Remove from the heat. Cool and store in the refrigerator; it will be good for up to two weeks.

Notable Cocktails that use Demerara Syrup

Combine the ingredients in a saucepan over low heat and simmer, covered, for 1 hour do not boil. Cool, strain into a bottle, and refrigerate for up to 2 weeks.

Notable Cocktails that use Cinnamon Syrup

In a blender, pulse the grapes a few times on low speed, then puree them on low for a few seconds, until the grape skins are chopped and the grape flesh is slightly broken down. Combine the rough grape puree with the sugar and water in a small saucepan. Cook over very low heat for 15 min, string frequently. The mixture should simmer only for about the last 3 min of its cooking time. Remove from the heat and strain through a fine mesh strainer, gently pressing the solids to extract any liquid. Refrigerate until completely cool. Store in the refrigerator in a closed container for up to 2 weeks.

Combine the ginger, lime juice, and sugar with the water in a saucepan. Simmer, but do not boil, until the sugar is dissolved. Strain, cool, and bottle for use.

Notable Cocktails that use Ginger Syrup

Grenadine is a syrup made from the amalgamation of sugar and pomegranate juice. It’s pretty simple to find artificial grenadine readily bottled to use for your home cocktails, but this is one ingredient you might feel more inclined to make at home, as bottled grenadine is typically too sweet for my liking. But to each is own.

Grenadine adds a combination of sweetness and tartness as well as a reddish or pink hue to your cocktails. Tightly sealed, a grenadine syrup can last at most 2 months in the fridge but is best to be used within the first month.

Mix the ingredients in a saucepan and cook over low heat to dissolve the sugar; do not boil.

Notable Cocktails that use Grenadine

Honey is wonderful in drinks, but at full strength, it is difficult to use. A practical way of preparing honey for use in drinks is to turn it into a thinner syrup, similar to simple syrup.

Honey syrup can last about a month in the fridge.

Combine 1 part honey with 1 part warm water and stir until all the honey is dissolved.

Notable Cocktails that use Honey Syrup

Notable Cocktails that use Pineapple Syrup

Probably considered the king of all cocktail syrups, you’ll find yourself making batches upon batches of simple syrup throughout your cocktail making journey. Really makes you consider how much sugar goes into these cocktails doesn’t it?

Dissolve equal parts by volume of granulated sugar and water. This can be done by the cold method of simply shaking the mixture until the sugar is dissolved or by warming in a saucepan without boiling. Boiling will concentrate the syrup and that will change the ratio of sweet to sour.

Notable Cocktails that use Simple Syrup

Combine all the ingredients in a saucepan over low heat. Simmer slowly until just under a boil, then remove immediately from the heat. Strain and cool before bottling.

Notable Cocktails that use Triple Syrup

Notable Cocktails that use Raspberry Syrup

This cocktail syrup is kind of a tricky one, that involves a significant amount of your time, your effort for not much return on your investment. We will make a separate post on how to make orgeat syrup, but for not what you need to know is this.

Orgeat is a syrup made from almonds and can most commonly be found at cocktail bars that specialize in niche cocktails, Tiki bars, high end bars with a limited amount of traffic that can produce the supply of orgeat that their volume of customers demand.

Notable Cocktails that use Orgeat

So what did you think about our cocktail syrup list? Did we miss any? Let us know how we can improve our list or if you have any syrup recipes at home that you’d like to share. Expect some really sticky hands if your gonna be making these at home. Enjoy everyone. Get Hammered!