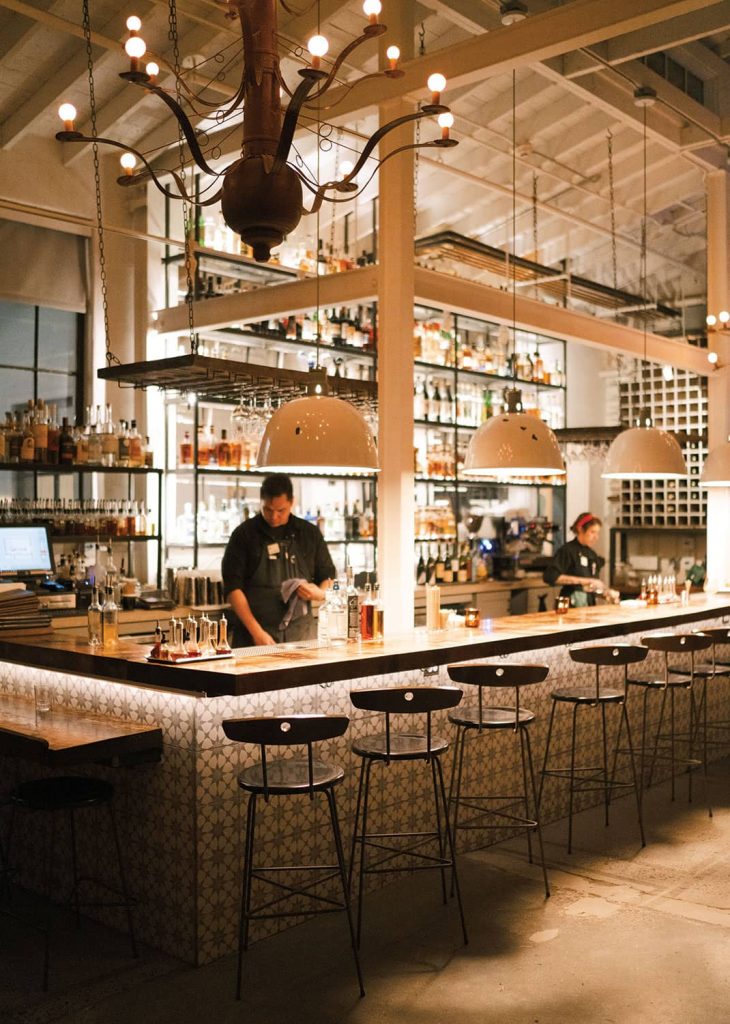 Where to Drink in Albuquerque, New Mexico

Many locals praise Albuquerque as a craft beer mecca, and rightly so. But Cutbow Coffee owner Paul Gallegos’ love for the city’s wines and burgeoning coffee community suggests that the Land of Enchantment may have more to offer than IPAs. A longtime roaster for Peet’s, Gallegos returned from the Bay Area to his hometown of Albuquerque in 2016 and two years later opened Cutbow Coffee, which has since become a mainstay for third-wave coffee lovers. The city’s long-evolving beer scene is still going strong, confirms Gallegos. “There’s always new breweries around town. It might seem like it’ll get oversaturated at some point, but I don’t think we’re there yet. So it’s pretty exciting to see and be a part of.”

Combined with a lesser-known wine history that dates back to the late 1800s, and a burgeoning cocktail scene, the Southwestern state showcases libations with a link to the land. “People are very proud to be from New Mexico, so any time there’s a chance to support a local business, they will,” Gallegos says. His favorite spots place a strong focus on New Mexican ingredients, flavors, and brands that make Albuquerque a self-sustaining space for beverages and their makers.

The 1,900-mile-long Rio Grande passes through much of New Mexico, including Albuquerque’s lush North Valley, originally inhabited by Pueblo peoples in the 14th century. Here, Pueblo Revivalist architect John Gaw Meem, along with other established craftspeople, redesigned a model experimental farm to become what is now the Los Poblanos Inn, a historic hotel set amid 25 acres of cottonwood trees, floral and vegetable gardens, and lavender fields, the latter of which were planted in 1999. “It’s the preeminent field-to-fork restaurant of Albuquerque,” says Gallegos. In addition to growing their own produce for their restaurant, Campo, Los Poblanos incorporates their lavender into much of the offerings, including Bar Campo’s signature Lavender ’99 cocktail—a build of gin, crème de violette, lemon juice, lavender syrup, and sparkling wine.

Though the West Coast may hold the lion’s share of attention for American-grown wine, New Mexico boasts an even longer history of grape production. “Mission wineries were established in New Mexico about 400 years ago, 150 years before vineyards in California,” explains Gallegos. The state’s three AVAs mostly accommodate grapes like Cab Sauv, Syrah, and Zinfandel, and include Gruet’s vineyards for several of their wines. Gilbert Gruet established Gruet et Fils in Bethon, France, before planting vineyards specifically for fine sparklers in southern New Mexico in the ’80s. Winemaker and longtime Champagne resident Cyril Tanazacq leads the operation, maintaining Gruet’s reputation of countless titles. “Some of the best sparkling wines in the area are produced there,” says Gallegos, who occasionally drops by the tasting room in Northeast Heights.

Gallegos exudes deep respect for the founders of Bow and Arrow. “It’s owned by a pair of amazing indigenous women, who inspire others through their leadership,” says Gallegos. “They also brew some delicious sour beers and those kinds of styles.” The brewery embraces new styles, flavor innovation, and constant collaboration, evidenced by the coffee stout they recently crafted with Cutbow. “It was light and pleasant and crisp, and it just had a wonderful coffee aroma that was really nice,” Gallegos says. Those curious to try pilsners with New Mexican blue corn, or aged farmhouse ales with wild yeast harvested from local lavender fields, can visit the brewery’s beer hall, or even road trip to the new “Rambler” taproom just off I-40 at the gateway to the iconic Four Corners Monument. In addition to the scenic view there, Gallegos says the space itself is warm, inviting, and beautiful.

“Marble has kind of been the incubator for a lot of craft brewers in Albuquerque, so they’re really well respected for that,” says Gallegos. Marble’s name comes from the street that its flagship downtown location operates on, which is Gallegos’ favorite of their (now three) taprooms for its expansive set of food trucks and weekend live music. For beer geeks on the hunt for novelty, the Northeast Heights location houses the Mav Lab, an experimental 10-barrel brewhouse that pumps out production beers for local businesses and limited-release runs for its locations. Past releases have included flavors that capture the essence of the Southwest, like the prickly pear- and Margarita-inspired goses, while experimental options like the Brett Tripel incorporate wine barrel aging and Brettanomyces to produce a funky, oaky, Belgian-inspired tripel.

Albuquerque’s Old Town neighborhood amplifies the most picturesque traits of the Southwest, from adobe-style businesses to succulent gardens and papel picados hanging throughout the alleyways. It also leads to Gallegos’ café Cutbow Coffee, just up the street from Old Town, which exudes a similar ambiance with its low-adobe building and mint-white Cutbow-branded 1970 Ford F100 truck parked out front. The café’s name represents the cutbow trout, and doubles as a tribute to Gallegos’ father, who used to cast lines on the waters of northern New Mexico. Patrons have an array of options to choose from, including crisp, single-origin pour overs or sweet signature drinks, like the popular Gommosita—a shot of espresso poured over a house-made marshmallow—and the Cortadito Bon Bon, an espresso sweetened with condensed milk.

The post Where to Drink in Albuquerque, New Mexico appeared first on Imbibe Magazine.