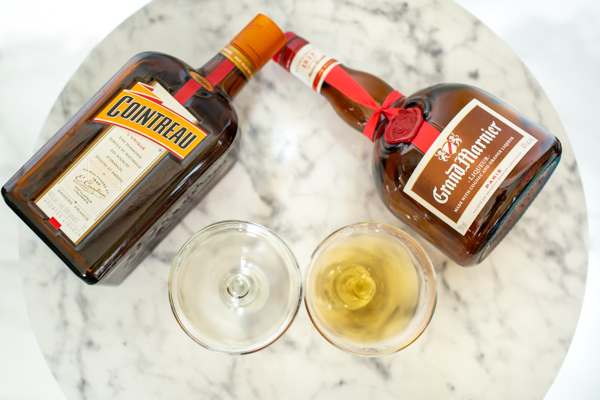 Cointreau Vs Grand Marnier: How Are They Made?

Cointreau and Grand Marnier are both French orange liqueurs (triple sec and curaçao liqueurs, respectively) that are often confused for one another, although they are actually a bit different and not entirely interchangeable.

Although they both have the same alcohol content at 40%, the differences in weight and flavor profile of these two well-known brands are derived from each distillation process, so let’s quickly explore how each is created.

WHAT IS COINTREAU, AND HOW IS IT MADE?

Cointreau starts as a 96% ABV (alcohol by volume) sugar beet alcohol, which is added to the still along with a mixture of bitter and sweet oranges from Brazil, Africa, and Spain, which gives this French liqueur its orange flavor. The mixture is left overnight before being distilled twice.

According to Cointreau, their liqueur has “the highest amount of essential oils and the lowest amount of added sugar.” Since Cointreau uses both sweet and bitter oranges, it’s considered to be in the “triple sec” style.

Traditional triple sec is not typically aged and generally made from neutral spirits. It’s a bittersweet liqueur and clear in color, with a more straightforward orange flavor and clean finish that blends well with base spirits in some of our favorite cocktail recipes, such as the classic Margarita, the White Lady, and the Cosmopolitan cocktail.

Photo by Thomas Thompson via www.unsplash.com

WHAT IS GRAND MARNIER, AND HOW IS IT MADE?

Unlike Cointreau triple sec, Grand Marnier is made with 51 percent cognac and bitter orange peels. As a result, it is considered to be of the curaçao style – named after the origin of one type of bitter orange.

In fact, this cognac-based orange liqueur was actually originally named “Curaçao Marnier,” as it was just one part of a large range of flavored liqueurs. Grand Marnier is a barrel-aged spirit made with Cognac rather than neutral alcohol (probably the most key difference between the two popular brands).

This amber-colored liqueur is sweeter and heavier than Cointreau, with notes of vanilla and a more complex flavor than traditional triple sec, and is therefore slightly less adaptable to a variety of popular cocktails.

COINTREAU VS GRAND MARNIER IN COCKTAILS

There are other brands of triple sec as well, but these are certainly the two best-known orange liqueurs.

Because of the ways they are produced and the different tastes they offer, Cointreau tends to be more versatile for mixed drinks and used more frequently; however, both have their places in the world of craft cocktails, although they are not exactly interchangeable.

If you were looking to substitute Grand Marnier instead of Cointreau in your favorite drink, you’d need to adjust the recipe and use less of the orange-flavored cognac liqueur than you would traditional triple sec/Cointreau (about 1/8 oz or so).

Likewise, if you need to substitute Cointreau for Grand Marnier, add about 1/8 oz more to add sweetness and weight.

So which do you prefer? Leave us a comment and let us know how you use these two orange liqueurs! Do you have a favorite cocktail recipe featuring either of these liqueurs? Do you substitute one orange-flavored liqueur for the other? Let us know!