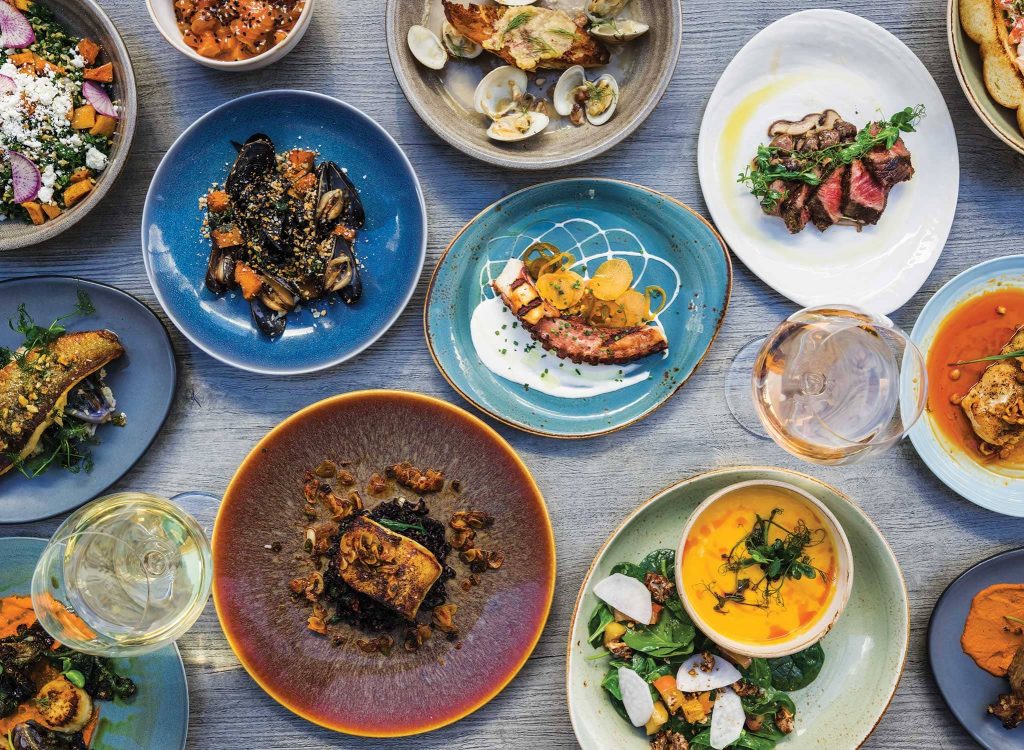 A bustling transit center and one of the most populous cities in the South, Charlotte, North Carolina, may be best known as a hub for professional sports, home to the Carolina Panthers, the Charlotte Hornets, and the NASCAR Hall of Fame. But the city’s rapidly evolving food and drinks scene is garnering its own devoted fan base. Tamu Curtis has called the city home for a decade, offering cocktail experiences through her company Liberate Your Palate, and now operating the bar supply store and classroom The Cocktailery.

“What’s unique about the growth here is that the pioneers in the industry who helped to define and create our drinking culture are still the most influential in the city—Colleen Hughes, Stefan Huebner who owns Dot Dot Dot, and Brian ‘Russ’ Johnson at The Public House are all still adding to and elevating our drink options,” says Curtis. “But with the growth Charlotte has experienced, now there’s room for up-and-comers to flex their skills and perspective in new restaurants and bars.”

Opened just this past May in Charlotte’s arts-centric NoDa neighborhood, Bar à Vins is part retail shop and part hang-out space. “Bar à Vins is the perfect urban wine bar—when you walk in, it’s all energy,” says Curtis. The curated-but-casual bar and shop is helmed by sommeliers Jeff Kellogg and Natalie Stewart (the former wine director at Fin and Fino), who aim for wines that are equal parts exciting and approachable. A trim selection of by-the-glass offerings complements the menu of bar snacks, but any bottle in the retail shop can be popped for a modest corkage fee. “Expect expert recommendations and tasting notes, a little education, and an intentional selection of wines,” notes Curtis. “Also, order the caviar, crème fraiche, and potato chips—so good!”

Food and wine at Fin and Fino. | Photo by The Plaid Penguin

“Fin and Fino is a seafood restaurant in the heart of Uptown that gets it right on every level, from food to hospitality, but for me it’s the bar program run by Brittany Kellum that really stands out,” says Curtis. Kellum’s regularly refreshed cocktail menu keeps things playful, with offerings like the Cowboy Tea, a mix of rye whiskey, green Chartreuse, Gran Classico Bitter (or Cynar), and vanilla, or Drunk Karaoke in a Shania Twain Wig, a combo of hibiscus-infused tequila, amaro, Cappelletti, and citrus. “The drinks are fun, fresh, visually appealing, and creative. Whatever your spirit of choice, ‘BK and The Clams’—as her crew refers to themselves—will take your palate on an unexpected journey.”

Opened in January of this year, Para pairs a globally inflected menu of small plates with an equally creative cocktail list aimed at matching the far-flung flavors of the food. “What makes the bar program so intriguing is how well it’s integrated with the cuisine they serve,” says Curtis. Yashira Mejia creates and runs the cocktail program, pulling flavors and ingredients over from the kitchen into drinks like a lychee-accented Moscow Mule or the Make it Crane, with Suntory Toki Whiskey, Aperol, Cardamaro, yuzu, and toasted sesame. “What I love about Para is that when you step in the space, you feel like you’re at a cool neighborhood haunt in a big city like LA, Chicago, New York, or Toronto,” says Curtis. “You can usually find me at the bar there a few times a month.”

Self-described as a Southern-steakhouse-meets-church-potluck, Supperland goes way beyond iced tea and lemonade. The Bar at Supperland and the Speakeasy at Supperland are both helmed by Charlotte industry vet Colleen Hughes, whose innovative approach to drinks contrasts delightfully with the midcentury church space. “Colleen is truly progressive when she concepts her cocktails—always using modern techniques, and new gadgets and methods,” Curtis says. “However, even with all of that, the result always ends up being refined and balanced.” Hughes is a fan of gin in particular, as evidenced by her 4G Negroni, which features four meticulously blended gins combined with Campari, sweet vermouth, and a dash of sherry before the whole concoction gets washed with olive oil.

Helmed by James Beard Award–nominated chef Greg Collier and his wife and business partner Subrina Collier, Leah & Louise and its Southern-inspired food has already garnered heaps of praise. But the drinks program, led by Justin Hazelton, deserves just as much shine, says Curtis. “Justin is a storyteller, and at Leah & Louise, it’s all about telling the story and sharing the history and contributions of African Americans in hospitality through his cocktails,” she says. Named the best bartender in Charlotte last year, Hazelton works closely with the kitchen to utilize shared or leftover ingredients, crafting elements for cocktails like a carrot cordial or a Carolina Gold rice orgeat. “I like to say he’s part cook, part mixologist,” says Curtis, who points to the regularly rotating Zodiac Punch as one of her favorites.